From the moment my twin boys were mobile (crawling, cruising around the furniture, walking and running), I became fixated on baby proofing our house to keep them safe.

My biggest fear, like all parents, was to ever see my boys in any type of pain from a fall or an accident. So I made sure to safeguard my house as much as possible, and kept them confined during the day to the den area. In total my house has 7 baby gates, yes 7, strewn across the first and second levels of the house, plus locks on the refrigerator, safety latches on all kitchen cabinets and drawers, a baby gate across the fireplace, a latch on the pantry drawer, edge guards on the tables, door handle locks and multiple baby monitors. We even nailed a massive baby gate over the built-in TV entertainment center to keep the twins away from the glass. But still, despite all of our efforts and best intentions, my Noah managed to be at the center of a heartbreaking accident last summer.

I will never ever forget that day. It was Sept. 17, 2015. The morning started off like every other day. It was around 8:30 a.m. and I had just finished feeding the boys their breakfast. I took them out of their high chairs and put them in the den to play with their toys. I then sat down at the dining table to eat my breakfast and watch them play. Not even two minutes into my meal, I suddenly hear a blood curdling scream. My eyes jumped and focused on where they were, and I’m trying to decipher who is screaming and why?! What happened?! What just happened?! I ran towards them, and found the two of them sitting near the entertainment center cabinet. (Yes, you know that ONE cabinet in the whole place that for one reason or another did not have a baby lock on it!!!!!! I later realized that somehow while they were playing, Noah managed to get his finger caught in the hinge of the cabinet door.) I grabbed Noah who was screaming and tried to see what is making him cry, then I looked down and notice he’s clutching his finger. And then I started to see blood. I couldn’t even begin to comprehend what I was looking at, but in the moment it seemed as though the tip of his middle finger on his right hand, was nearly cut off. I instantly started screaming and crying out of sheer panic. This was my first “accident” experience as a new mom. I was home alone, as I am everyday, with both of my boys and I didn’t know what to do. I called my husband and I was screaming so much that he didn’t understand what I was saying. All he said was, “Call 911, I’m on my way!” With Noah in my arms, I managed to call 911 and I was absolutely hysterical. The operator told me I needed to calm down and tell her exactly what was happening.

“I don’t know what happened, my twins were playing with each other and then I heard one scream. Now one of their fingers looks like it is cut off! What do I do? Please help me,” I screamed into the phone. The operator asked me, “Is your son’s finger intact or is it not?” In my panic I couldn’t even tell, there was blood covering his entire, tiny little hand and fingers. I forced myself to gain my composure and looked at it again (I had my hand shielding it from Noah) and then I realized the top of the finger was still intact, but it was nearly cut off. It was hanging on by a tiny piece of tissue. The 911 operator instructed me to wet a kitchen towel with hot water, and place it firmly over Noah’s finger to stop the bleeding. The ambulance and fire department were on their way. My poor Noah was in an excruciating amount of pain. I never heard anyone cry or scream the way he did that morning. He was kicking and wiggling around forcefully to get out of my arms. I remember as I was holding him in my arms, I kept dropping to the floor because his force was so strong. But I never let him out of my arms. It felt like I was waiting forever for help to arrive, and as I was clutching onto Noah, my other baby Nikoh was crying because he was scared too. But I couldn’t tend to him, and it broke my heart even more. I knew in that moment I was not able to properly take care of both of my twins, so I called my mom and just remember screaming and crying to her on the phone, but she couldn’t understand what I was saying as I was hysterical. I made the decision to run to my neighbor’s house to get help with Nikoh. I’ve never left my boys unattended, not even for a minute, but I knew I needed help immediately and I couldn’t wait for the ambulance. I told Nikoh, “Please baby don’t move, stay here.” And I ran outside with Noah screaming and kicking in my arms to the house next door. I was banging on the door, “Help me! Please help me!” (Looking back on it now, I probably scared my neighbor half to death…) But I couldn’t help myself, I was desperate for another person to help me because I was going absolutely crazy trying to keep it all together.

Luckily my neighbor happened to be home that morning. Her daughter opened the door, and ran to get her mom. When she saw me there on her porch, I was crying so hard and remember saying to her, “Please come help me with my baby Nikoh, he’s inside my house alone. The ambulance is on the way.” She didn’t ask any questions, she just put her arms around Noah and I,  and calmly walked us back to my house. Once we got there she picked up Nikoh and consoled him. I remember the four of us were standing right next to the front door, Noah still screaming in pain, and she said a prayer and told me God was with us, and would take care of Noah. A second neighbor appeared moments later, and I remember handing him my phone and telling him please call Hector, my  husband, and let him know the ambulance is coming. Had it not been for my neighbors, my angels, I don’t think I would have made it through those moments.

When the paramedics and firefighters finally arrived, they grabbed Noah from my arms and rushed him into the ambulance. I asked my neighbor to please stay with Nikoh until our family arrived. In that moment, as grief stricken as I was because of Noah’s pain, I felt so bad having to leave Nikoh behind, but I had to be with Noah. In the ambulance he was screaming so much from the pain, and I am certain he was terrified with all of the commotion. The firefighters wrapped his hand, and in the ambulance told me they needed to give him Morphine to calm him down and keep him from passing out from the pain.  At that time he was only 18 months old, so the thought of Morphine petrified me. But the moment it was injected, he calmed down a lot.  And I was so thankful he was finally getting a little relief from the pain. 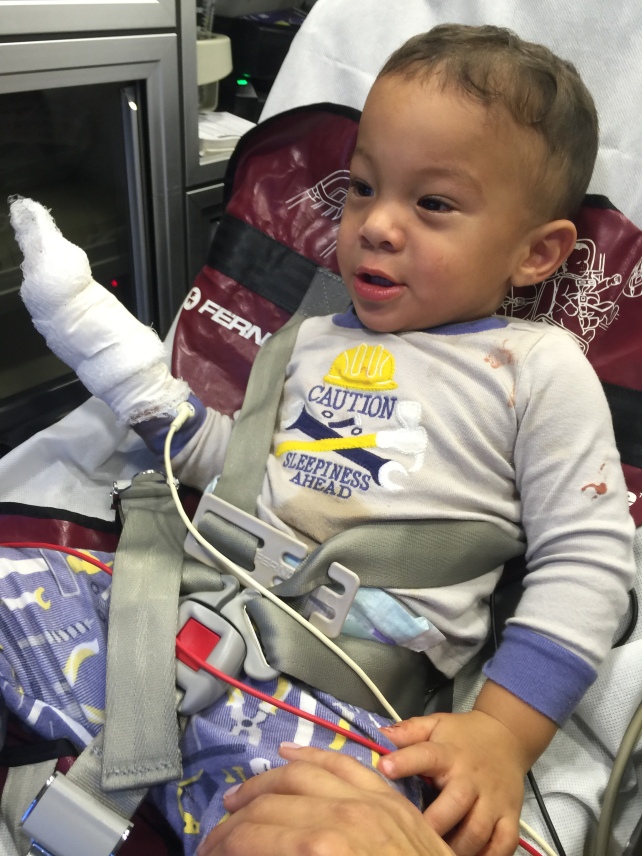 Noah in a daze after receiving Morphine in the ambulance ride.

Once we arrived to Kaiser Riverside’s emergency room my husband was thankfully there. I remember laying on the hospital bed with Noah on top of me, and for the most part his pain seemed to be under control while we waited for the doctors. During that time I remember crying a lot, and questioning how I could let something so awful happen to my son?… The doctors told us Noah would require a procedure and needed anesthesia. I still remember my husband and I crying as Noah’s beautiful, big, brown eyes began to change. He stared around the room blankly and just watching his little personality instantly fade away as he fell asleep was such a horrible and scary feeling. I remember praying to God, “Please take care of my baby, please give him peace, please make sure he wakes up.” I have tears in my eyes as I write this because the pain I felt for my son in that moment is always with me, right beneath the surface of my heart. An orthopedic surgeon arrived to do the procedure. He removed Noah’s nail, then stitched the entire top of the middle finger, literally from left to right, back together. I’ve never had a tough stomach, but as a parent you know if your child is going through something, you are too. So my husband and I were right there at Noah’s bedside watching the entire procedure. From start to finish. It felt like an eternity, but lasted about 30 minutes. He was observed in the ER for a few hours, and by the end of that horrible night we were able to take him home.

For the next two weeks, we had to limit Noah’s activity to make sure his finger healed properly. Nikoh went to stay with my mom for a few days after Noah’s accident to make sure he got the attention he needed, and to ensure I had the ability to focus on Noah and nursing his injury. In the following weeks, Noah was seen at Loma Linda Hospital’s Pediatric Orthopedics for his follow-up appointments. His doctors were confident his finger would heal perfectly, and Noah wouldn’t have any problems because of his injury in the future.

Although we’ve shared the details of Noah’s accident with family and friends, it’s taken me 8 months to write this blog and share it so publicly because I carry a lot of guilt for not being able to keep Noah safe in that moment when he needed me.  But what I’ve realized since the accident, is that Noah, a.k.a. Baby A & Nikoh’s big brother, is resilient and stronger than I ever imagined. And accidents, no matter how much I try to prepare and be one step ahead of them, are bound to happen.

Noah’s ok. His finger is absolutely perfect, with no scars, or traces from his accident or procedure. You’d never even know he just about chopped his finger off, lol! Yes now I can laugh at that statement, because it’s after the fact and laughter is the best medicine. 😉 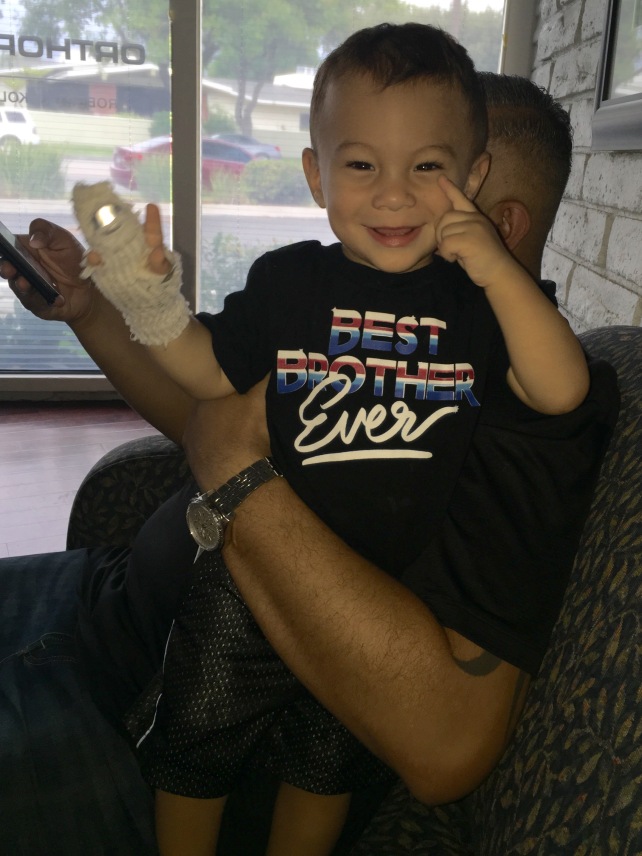 Noah and daddy at his follow-up appointment.

On a serious, ending note though, it was so much trauma for such a little baby boy, only 18 months old, to endure. But Noah handled it like a little, but brave warrior…a characteristic of the preemie spirit he’s had since the day he and Nikoh were born. 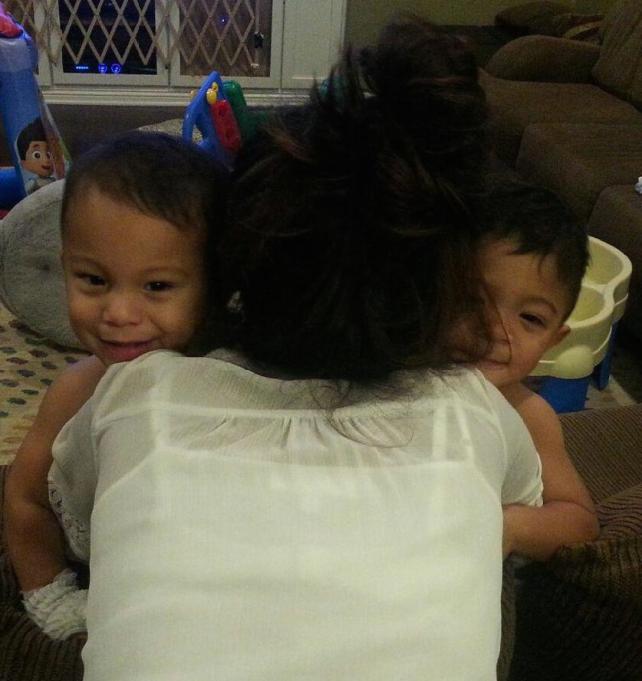 Noah and Nikoh in a group hug with mommy after being reunited.

And as for me, it definitely wasn’t my best mommy moment when I look back on how frantic I was that day. And while I have not completely  forgiven myself for not being there, I have realized so many things are out of my control today, tomorrow and for the rest of their lives. All I can do is my upmost best every single day to keep them safe and happy, and the rest just has to be what it will be.

3 thoughts on “Heartbreaking Accidents Will Happen…”