My twins have been sprouting like weeds the last few months! It’s still hard to fathom my tiny 3 pound preemies are now almost 15 months-old, weighing 28 (Noah) and 25 (Nikoh) pounds.

Nothing short of miraculous to watch them play together…Today as I remember them sleeping in their NICU incubators, it almost feels like another lifetime.

I originally intended to populate this blog much more frequently, but being a mother to my twins has proven to be incredibly demanding ever since they started crawling, and now walking and climbing on absolutely everything! (And NO baby proofing doesn’t really help when you have one toddler going left and the other toddler going right.) I always find myself thinking and talking about how difficult twin motherhood is, not because I want people to say, “Oh poor you,”….but more because I am still amazed at how mothers do it, and how they did it decades before me with much less resources.

Twin motherhood is quite the beautiful challenge and you can never fully comprehend it unless you have carried two babies in your womb simultaneously and taken care of them everyday. There are moments where it feels overwhelming and almost impossible, but there are also plenty of times where it brings more love and happiness I ever could have imagined. Tears normally accompany both ends of those two spectrums. 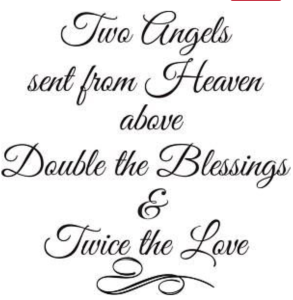 Every aspect of twin motherhood has indeed had its immense challenges, and certainly its highs and lows, but the part that literally tugs at my core is the obvious fact that there is ALWAYS two of them and one of me. I have two babies, only 1 minute different in age, who often need and want me at the exact same time. It tears my heart apart to have to pick between the two of them when deciding who to tend to first. Believe it or not, it happens several times a day.

Many parents tell me what a blessing it is that my twins are each other’s playmates. Yes, it’s so wonderful that they love to make each other laugh and they do entertain each other all day. But what happens when they are playing, chuckling, having a great time and all of a sudden they bump their heads together? This happened last week. There I was with my two babies, crying “mommmm! mommmmm!” I ran over to them, dropped to my knees and scooped them both into my arms so they both felt comforted. But I couldn’t pick them up simultaneously, and there was no way to give them the individual TLC I know they needed. It broke my heart to see the tears rolling down their little cheeks, boogies coming from their little noses, and I had to divvy up my hands to wipe the tears and clean the noses with one hand each.

And then there are the times when they are sick, when only my arms can comfort them. The last two weeks Nikoh was very sick with bronchitis. His throat was so swollen and red he didn’t eat or drink much. He was sluggish and not nearly his playful self. He wanted to lay on my chest, and in my arms for the better part of one week. But then there was Noah, who didn’t catch bronchitis, but did have a high fever for a few days and some congestion and would you believe he just wanted to be in mommy’s arms too?

Aside from being in the NICU with both Noah and Nikoh, these last few weeks have been the most emotionally and physically draining for me. I literally had to rotate babies in and out of my arms for several days straight so I can give them an equal amount of love, comfort and attention. It was so hard to do. I would be holding Nikoh trying to soothe him, and never really got to give him all of my attention because I was looking over at Noah who would often be sitting on the floor, leaning on my legs and looking up at me with his red and swollen little eyes. After 30 minutes of holding Nikoh, I would switch and it would be Noah’s “turn.” Imagine doing that over and over. It was like neither one of them were fully comforted because once they started to feel secure and cozy with me, I had to put them down and pick up their twin brother.

But it’s not always seeing them cry that makes me sad, sometimes it’s seeing them happy and wanting me so much.

At least once a day we watch one of their favorite cartoons, The Mickey Mouse Clubhouse, I know all of you parents can relate to how magical this show really is! The second they hear the theme song, Noah and Nikoh will stop whatever it is they are doing and instantly turn to look at me and once we’ve made eye contact they start dancing, bouncing their little legs up and down. They both run up to me as I am dancing along with them and start reaching for me to pick them up. How do I decide who gets picked up and dances with mommy, and who stays dancing by himself? As a twin mom I have learned when I can’t get to them at the same time, they have to take turns. So today for example I picked up Noah and danced with him in my arms, while I dropped my other arm and grabbed Nikoh’s hand so he too can feel like he’s dancing with mommy. This might not sound like a huge dilemma to some, but trust me when you are a mom to twins it is heartbreaking not being able to give them the attention they want, need and deserve right when they ask for it.

I imagine parents who have more than one child also have to deal with these scenarios from time to time, but I can’t be certain it’s as intense as having two children the exact same age needing you at the exact same time and likely for the exact same reason. This is just one of the things about twin motherhood I never even thought about during my pregnancy, because I really had no idea what to expect. And despite my research, there was no book out there teaching me how to be “OK” with dividing my heart and attention between my two, precious boys, every second of everyday.

All I can hope and pray for is that the times I do give them both individual and “twin” love and attention, they feel comforted by me and loved enough to feel like they were born to the best mama in the world.