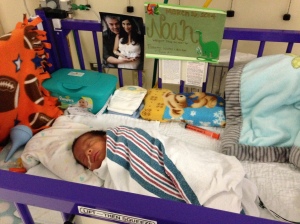 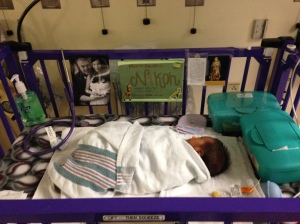 (**These are pictures of Noah and Nikoh’s cribs that showcase the name tags made for them by the NICU nurses. In these photos the boys are in cribs, which they “graduated” into after being held in their incubators for several weeks. More on this in future blogs! )

Picking out names for our twin boys was something my husband and I put a lot of thought into. Truthfully speaking, when I went into labor we hadn’t yet decided whole-heartedly on what their names would be when they were born, but somehow they ended up being perfect.

I always knew the names of my children wouldn’t be too common (mostly because my name, Nisha, is unique) and would definitely have to carry a special meaning.

When Hector and I started dating in 2006, we would sometimes talk about having kids and getting married (a very light-hearted, nonchalant type of conversation that many people who are dating tend to have from time to time.) I always loved the name Noah, and when I realized it began with an “N” and ended in an “H” I knew I would name our son that if we ever had one. I loved that it began with my initial, and ended in his.

So when we found out we were blessed with twin boys, we knew Noah was definitely a top pick for Baby A, or the baby who was born first. We wanted our twins to have names which began with the same letter, so we knew the second name would also have to begin with “N.” We also thought it would be special if Baby B’s name would also begin and end with our initials, “N” and “H.” The name Niko came up in our baby name research and we both really liked it. Niko wasn’t too common and sounded strong just like Noah. So we decided if we chose Niko, we would add the “H” at the end that way they would both start with “N” and end with “H.”

Something about our initials encompassing the names of our sons, made it special to Hector and I.

When our twins were born we hadn’t yet agreed 100% that they would be Noah and Nikoh, although those two names were at the top of our baby names list. But because things moved so fast during the babies’ premature delivery, we didn’t have time to debate other names. So we stuck with our frontrunners, and used our second favorite names as Noah and Nikoh’s middle names. Jeremy was chosen as Noah’s middle name. My mom loved the name Jeremy and after mentioning it to me, I loved it too. Jude was another name I love because it sounds beautiful and too is very unique.

If you’ve ever met Noah Jeremy Jaime and Nikoh Jude Jaime, you know that their names fit them absolutely perfect. Baby A, or Noah, is such a peaceful, calm baby with light skin and a round, cherub-esque face (characteristics which remain true to the “peaceful, restful” meaning of “Noah,”). Baby B, or Nikoh, has a lot more hair than Noah, darker, more exotic features and a feisty, little personality which in our minds coincides with the strong meaning of Nikoh, “victory of the people.”

A lot of people asked how we determined who would be Noah and who would be Nikoh, and I tell them Baby A was always Noah since we chose that name first, and Baby B would always be Nikoh. I can’t tell you how many people tell us, “Their names suit them so well!”

I completely agree…twice as special!