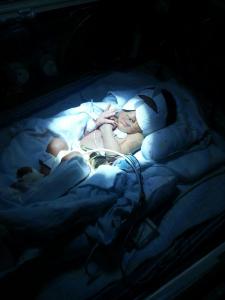 Before my twins were born on March 26, 2014, I had never been inside a neonatal intensive care unit. I quickly learned the NICU would be where we experienced just over a month of triumphs and heartaches. But most importantly, it was in the NICU where no matter if a day was a “high” or a “low,” they were always precious, unforgettable and life-changing moments with our preemies Noah and Nikoh.

Throughout my pregnancy I anticipated spending time in the NICU with my babies, because I knew I would deliver them early, but I never imagined what a critical role it would play during my babies’ first few months of life. I was there around the clock bonding, feeding, bathing, nurturing and learning how to nourish and protect Noah and Nikoh once it was time to take them home…By far the most memorable time of my life.

Some of my NICU recollections

Hector and I were allowed to visit our babies in the NICU anytime we wanted, and if we were ever away from the NICU for a few hours, we could call and get updates about their conditions. Common updates we would ask for when we would call in the morning after spending the night at home were if Noah and Nikoh were breathing well, how did their feedings go, had they been crying or fussing, were they sleeping well, had they gained weight over night and were there any signs of developing infections or setbacks? The babies could not have any other visitors, except for their grandparents, who visited them just about everyday and were able to create special bonds of their own.

Each time we entered the NICU, we rang a doorbell, the nurse answered and we would say, “We are here to see our babies, Noah and Nikoh Jaime.” Once we were buzzed in, we placed our belongings in a locker, put a hospital robe on over our clothes and thoroughly washed our hands (from elbows to fingertips). Hand washing was extremely important because the NICU houses so many premature and sick babies, so keeping germs away from the unit was of upmost priority for both parents and hospital staff.

Inside the NICU, Noah and Nikoh were always nestled in their individual incubators. Although they were separated, they were always placed right next to each other that way when we were spending time with them, there was only a few steps between them (Often, we would stand or sit on a rocking chair in the middle of both incubators, that way we could look “left” and “right” to watch them both at the same time). The babies’ incubators had their names written on the outside, and inside the incubator we were allowed to tape prayer cards and a picture of Hector and I on the incubator walls so the babies knew mommy and daddy were always there with them. (Thinking back, I am sure the picture and prayer cards brought more peace and comfort to Hector and I, than it did to the babies. As NICU parents, it was heart-wrenching to have to leave them once I was discharged, which I will also blog about soon.) Nevertheless I had to do anything in my power to make sure my babies never felt alone, so hopefully the pictures and prayer cards brought them comfort and strength too.

On the babies second day in the NICU, I remember noticing their hospital identification bracelets. I assumed it would have their names on them, but instead they said “Nisha Monique Jaime.” It’s amazing how something so basic — my name, which I have seen countless times in print — had such a powerful effect on me. Seeing my name on their identification bracelets was the first time I really “felt” like they were mine…and it was an incredible feeling, because I had prayed and yearned for them for such a long time.

That moment was so profound, because I knew although they had nurses taking care of them, it was our love, dedication, strength and prayers that would give Noah and Nikoh the courage to grow and thrive.

Inside the NICU was also the first time Hector and I were called, Nikoh and Noah’s “mom” and “dad.” I can’t describe how beautiful it felt to finally have those titles, because we had prayed for our babies for so long. Just hearing “Hi Mom and Hi Dad,” from the NICU nurses made us both feel so special and made “parenthood” feel so real. Especially because at night when it was time for us to go home without Noah and Nikoh, our hands and hearts felt so empty.

Noah and Nikoh were born two months premature, and weighed 3.6 pounds (Noah) and 3.9 pounds (Nikoh) at birth. They had a lot of developing and growing to do before they were discharged from the NICU and went through a month of uncomfortable procedures, pokes, transfusions and surgeries. They also battled infections before, and after, they came home.

Prayers from our family and friends helped us and the babies through the saddest moments, like when Noah was discharged and we had to leave Nikoh for 10 more days in the NICU, watching Noah’s circumcision, seeing Nikoh struggle to tolerate his feedings and gain weight, and when left on discharge day and had to trust our precious babies in the hands of the NICU nurses while we went home for the night.

I have so many NICU memories with Noah and Nikoh, and look forward to blogging about more of them soon.

(**These are pictures of Noah and Nikoh’s cribs that showcase the name tags made for them by the NICU nurses. In these photos the boys are in cribs, which they “graduated” into after being held in their incubators for several weeks. More on this in future blogs! )

Picking out names for our twin boys was something my husband and I put a lot of thought into. Truthfully speaking, when I went into labor we hadn’t yet decided whole-heartedly on what their names would be when they were born, but somehow they ended up being perfect.

I always knew the names of my children wouldn’t be too common (mostly because my name, Nisha, is unique) and would definitely have to carry a special meaning.

When Hector and I started dating in 2006, we would sometimes talk about having kids and getting married (a very light-hearted, nonchalant type of conversation that many people who are dating tend to have from time to time.) I always loved the name Noah, and when I realized it began with an “N” and ended in an “H” I knew I would name our son that if we ever had one. I loved that it began with my initial, and ended in his.

So when we found out we were blessed with twin boys, we knew Noah was definitely a top pick for Baby A, or the baby who was born first. We wanted our twins to have names which began with the same letter, so we knew the second name would also have to begin with “N.” We also thought it would be special if Baby B’s name would also begin and end with our initials, “N” and “H.” The name Niko came up in our baby name research and we both really liked it. Niko wasn’t too common and sounded strong just like Noah. So we decided if we chose Niko, we would add the “H” at the end that way they would both start with “N” and end with “H.”

Something about our initials encompassing the names of our sons, made it special to Hector and I.

When our twins were born we hadn’t yet agreed 100% that they would be Noah and Nikoh, although those two names were at the top of our baby names list. But because things moved so fast during the babies’ premature delivery, we didn’t have time to debate other names. So we stuck with our frontrunners, and used our second favorite names as Noah and Nikoh’s middle names. Jeremy was chosen as Noah’s middle name. My mom loved the name Jeremy and after mentioning it to me, I loved it too. Jude was another name I love because it sounds beautiful and too is very unique.

If you’ve ever met Noah Jeremy Jaime and Nikoh Jude Jaime, you know that their names fit them absolutely perfect. Baby A, or Noah, is such a peaceful, calm baby with light skin and a round, cherub-esque face (characteristics which remain true to the “peaceful, restful” meaning of “Noah,”). Baby B, or Nikoh, has a lot more hair than Noah, darker, more exotic features and a feisty, little personality which in our minds coincides with the strong meaning of Nikoh, “victory of the people.”

A lot of people asked how we determined who would be Noah and who would be Nikoh, and I tell them Baby A was always Noah since we chose that name first, and Baby B would always be Nikoh. I can’t tell you how many people tell us, “Their names suit them so well!”

I completely agree…twice as special!